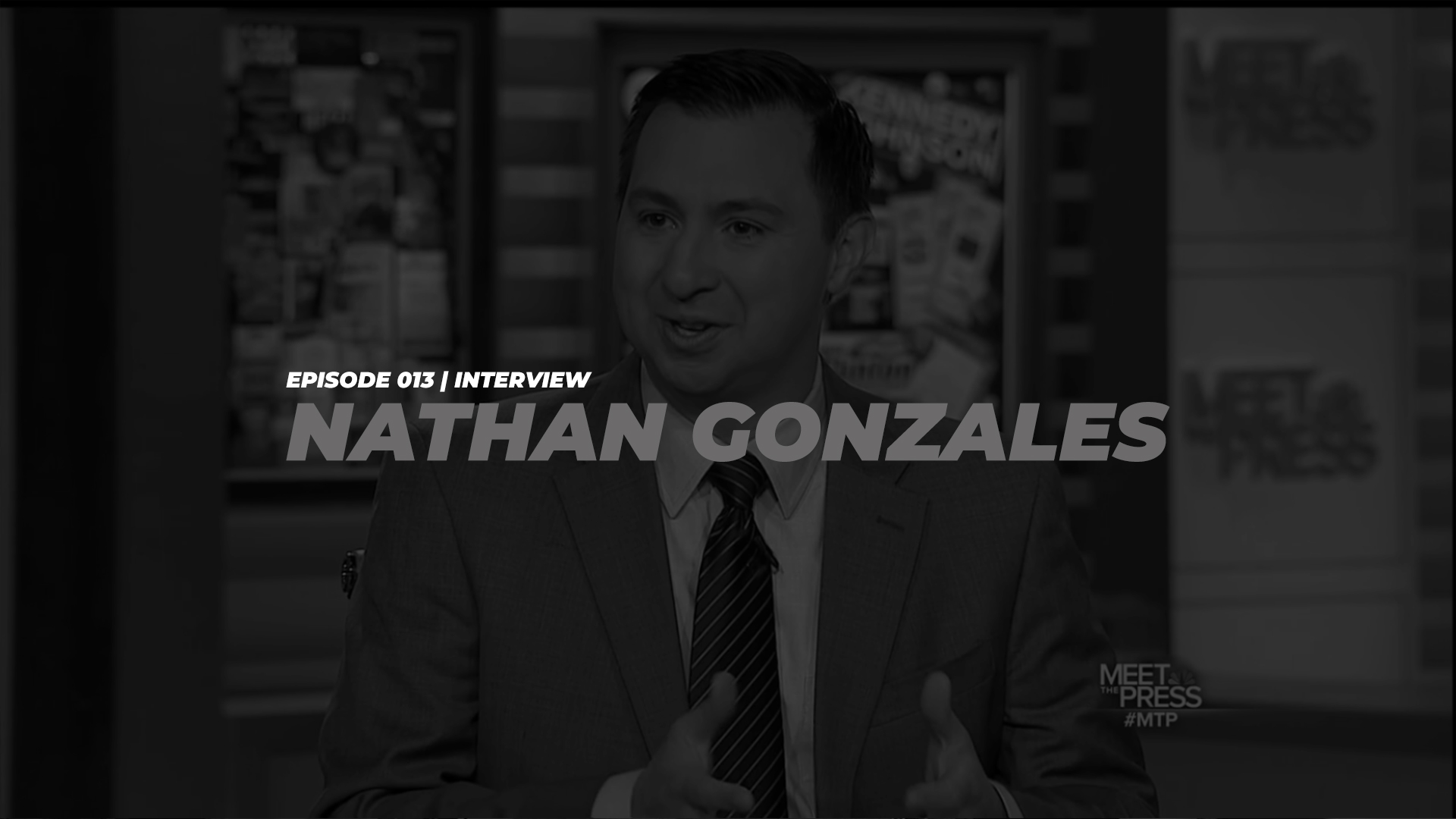 To almost all Americans, integrity in politics is an oxymoron, like diet gravy or fat free ice cream. Not so to Nathan Gonzales. This Editor and Publisher of Inside Elections interviews political candidates personally – from congressional and gubernatorial to state races, and using poll numbers, economic data, historical information, trends, demographics, interviews, and entertaining stories and analogies (he’s a self professed politics nerd), Nathan analyzes the current political environment and performs an election “autopsy” on the latest races, projecting what the results mean for normal, everyday citizens.

Nathan offers powerful insight into being responsible to what is true, non partisanship and all the trappings of Washington DC, the eye of the political hurricane in America.

”The most powerful agent of growth and transformation is something
much more basic than any technique: a change of heart.

Recognize the name Peter Maravich? If not by his birth name, most basketball enthusiasts know the name birthed and given to him through basketball. You see, long before there was a “Doctor” or a  “Magic” or an “Air Jordan,” there was a “Pistol.”

A skinny white guard from LSU, Pistol Pete Maravich was a Harlem Globetrotter in skill and spirit, mastering the behind-the-back, over-the-shoulder, and “look away” pass. “If I have a choice whether to do the show or throw a straight pass,” said Maravich, a three-time All-American, “and we’re going to get the basket either way, I’m going to do the show.” While Pistol Pete is the NCAA Division I all-time leading scorer, it was his gamesmanship that dazzled and bewildered the throngs of fans that flocked to watch his creative genius. With the ball seemingly connected to his fingers by an invisible string, Pistol Pete’s skillful dribbling often left defenders looking foolish, the ball smoothly moving between his legs, behind his back and through the smallest of openings. 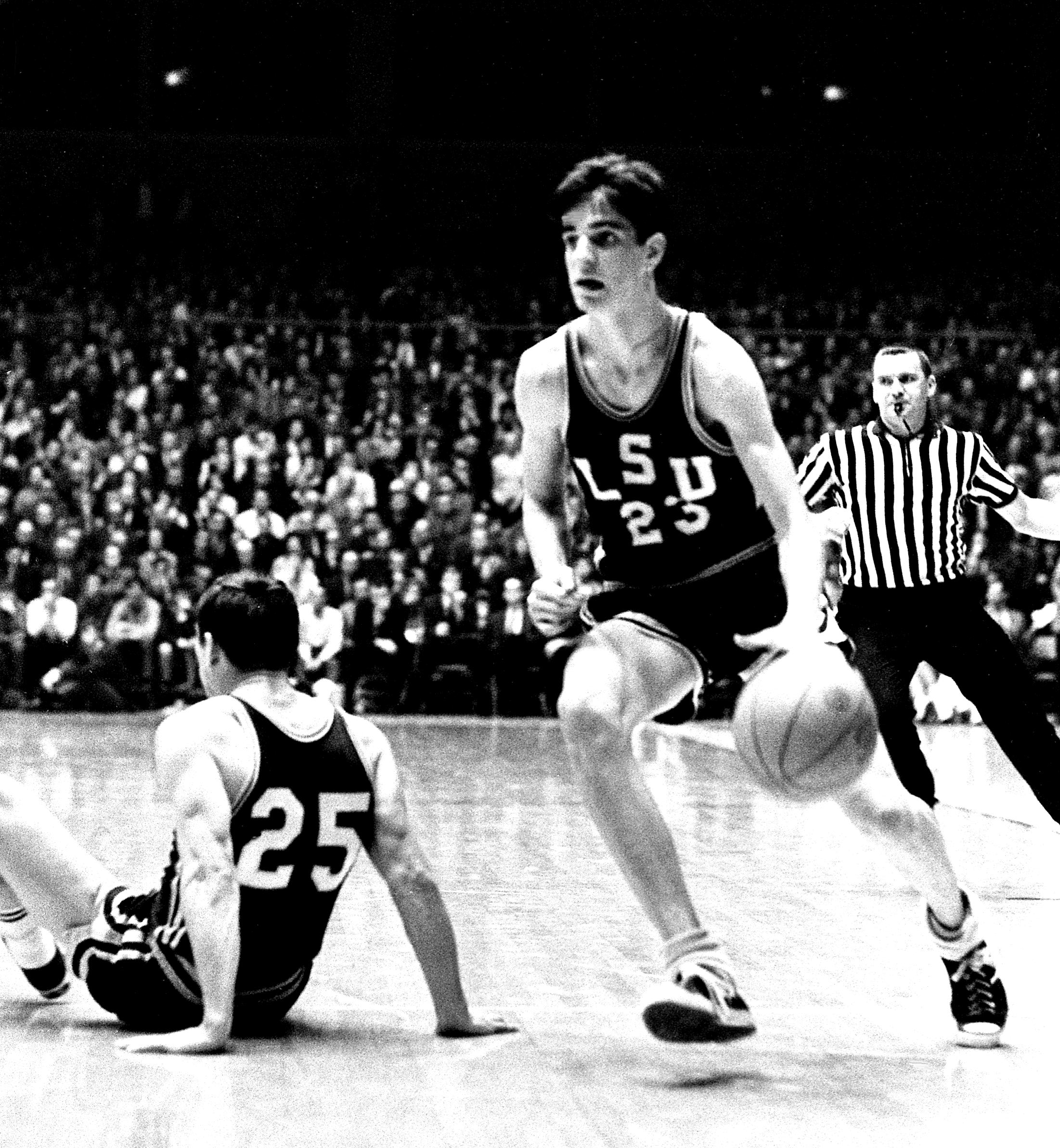 At a summer camp, coach Lefty Driesell critically told him that the great Oscar Robertson succeeded without flamboyant passes. Maravich responded that he wanted to be a millionaire, “and they don’t pay you a million dollars for two-hand chest passes.” At LSU, where Pistol Pete played for his father Press, he set still-standing Division I records with his 44.5 average for a season (1969-70), 44.2 average for his career (1967-70) and his 3,667 points. Maravich’s three-year total was 418 more points than the runner-up scored in four seasons in the 1970s.  In the NBA, Maravich was selected to five all-star teams and was later voted among the league’s 50 greatest players. He averaged 24.2 points per game for his 10 seasons and one year led the league with a 31.1 mark.

“Pistol” wore his hair long and shaggy and his socks seemingly two sizes too large, but he produced huge numbers. What made “Pistol Pete” so effective as a player were his vision, creativity and never-ending energy. Rail thin and in fantastic physical shape, Maravich looked as if he could run for days, never tiring as he wowed fans and players alike with his “street ball” style. 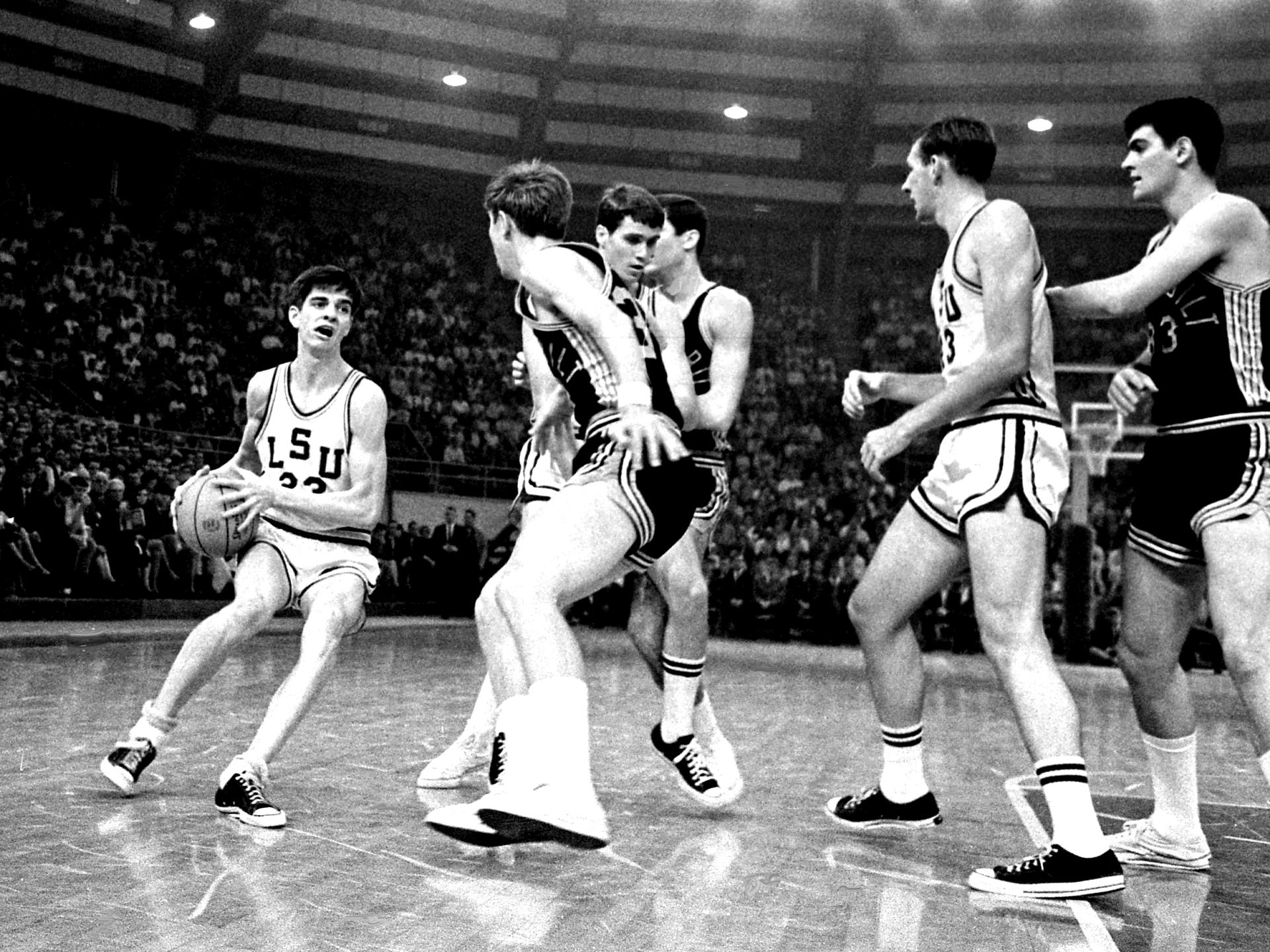 On January 5, 1988, only a few years removed from playing grueling 70 plus game schedules, while playing a pickup basketball game with a group that included Focus on the Family head James Dobson (Maravich was scheduled to appear on Dobson’s radio show later that day), Pistol Pete collapsed and died of a heart attack at the age of only 40. An autopsy revealed that his death was due to a previously undiagnosed congenital heart defect; he had been born with only one coronary artery instead of the normal two.

It is stories like that of a Pistol Pete or a Reggie White – pictures of seemingly perfect health that tragically and suddenly dropped dead of a heart attack at a young age – that cause us to come to grips with a sobering truth: Any attempt to judge the health and strength of someone’s heart can prove futile. Like the greatest college football rivalry games, when it comes to evaluating the strength of someone’s heart, all bets are off. Why? Because you and I can’t see the heart. It is an invisible force. It works behind the scenes to keep the body running. You know when you have a problem with your eyes: you can’t see. You know if you can’t hear anything that there is a problem with your ears. But you can’t see your heart. In fact, the less conscious we are of our heart’s function, the more likely it is that all is well in the “engine room.”

In the physical world, when you have a heart problem, you don’t necessarily know you have a heart problem. It can manifest itself in other parts of the body, right? Shortness of breath, a lack of energy, tightness in the chest, constant indigestion, and numbness in the extremities are just a few of the warning signs of potential heart complications. But if you have shortness of breath, you could think, “Maybe I have a lung problem.” You have terrible indigestion and you may think, “Maybe I have a digestive problem” (or maybe just too much Mexican food). If you have numbness, “Maybe I have a circulation problem.”  But often times we discover we have heart issues not because our heart hurts, not because there’s anything noticeably wrong with our heart, but because it manifests itself in other parts of the body. Our bodies are uniquely made to give us distress signals when things are not right. Like flares against a clear night sky, these signals warn of impending danger. Signals that need not be ignored.

The interesting thing is when you open the Scripture, both in the Old and the New Testament, you find a parallel idea where God talks about the fact that if a person has a bad heart or an evil heart (it’s described in lots of different ways) it manifests itself in ways that aren’t necessarily associated with the heart.  Specifically, a bad heart or an evil heart will manifest itself in what you say and what you do: your words and your actions. We tend to think it is just a major lack of control of speech. But you don’t simply have a speech problem. You have a heart problem. We think we simply have a behavior problem. The reality is that we have a heart problem.

Here is a painful reality: we all say things we wish we’d never said, and we all do things we wish we’d never done. Where our remedy becomes skewed is that we feel like we should tackle these issues by being careful what we say and being careful what we do. Most of us will spend the better part of our lives trying to cover up a messed up, corrupted heart by controlling our behavior and being careful with our words. Our days become an exhausting exercise of “cat and mouse.” We are so very careful not to say something or do something that would reveal the pollution within. And God says ” No it’s not just about what you say and do because what you say and do emanates from your heart.  And until you deal with issues of the heart and matters of the heart you can spend the rest of your life trying to be careful what you say and careful what you do and never deal with the root issue.”

”We think we simply have a behavior problem. The reality is that we have a heart problem.

Think of it this way: Let’s say you have a pear tree in your yard that yields an abundance of pears each year. So abundant, in fact, that the pear tree cannot bear the weight of all of the fruit and your yard becomes a sea of pears that have fallen off the tree That seems like a great problem except for the fact that you keep stepping on pears and twisting your ankle when you run and play with the kids in the yard. When you try to cut your grass, you keep running over the pears with the lawnmower, and the fallen pears become heat- seeking missiles. You have dents in your car to prove it. And your children keep coming inside with gobs of dirty, unwashed pear stuck to their faces. The pears have become a burden. So what should you do?

You could grab a bucket and pick all the pears off the tree and off the lawn. One big problem: that would work for this year, but next year will spawn a new crop of pears. Or you could dig up the tree by the roots and alleviate the issue completely. In other words, handle the source and you handle the problem.

INFLUNSR defines integrity as choosing to be responsible to what is true. As a next generation leader, you may be thinking that this is really not that big of a deal. After all, life is about controlling what you say and being careful what you do. Everyone you know deals with this. It is a universal issue. Yes, it can cause some tension at times. In fact, if the truth were known, you are addicted to that chaos. There is a part of you that gets off on saying something cutting or rude or doing something outside the lines. But why should you do anything about it?

This is the biggest of deals. Lean in close and let me tell you why.

Your entire being is an extension of your heart. We live, lead, parent, work, relate, romance, and love from our hearts. Every relationship is affected. Our style is affected.

So what do you do?

Jesus’ implication was there has to be a change of heart. Your heart cannot remain in its present state and your words and actions change.

Here’s what God is willing to do in you. He says I will give you a new heart and put a new spirit in you; I will remove from you your heart of stone and give you a heart of flesh. In other words, God wants to change you from the inside out so that your words and actions flow from a new heart.

It is a process. One we can facilitate with God or resist. But it is His goal in you.