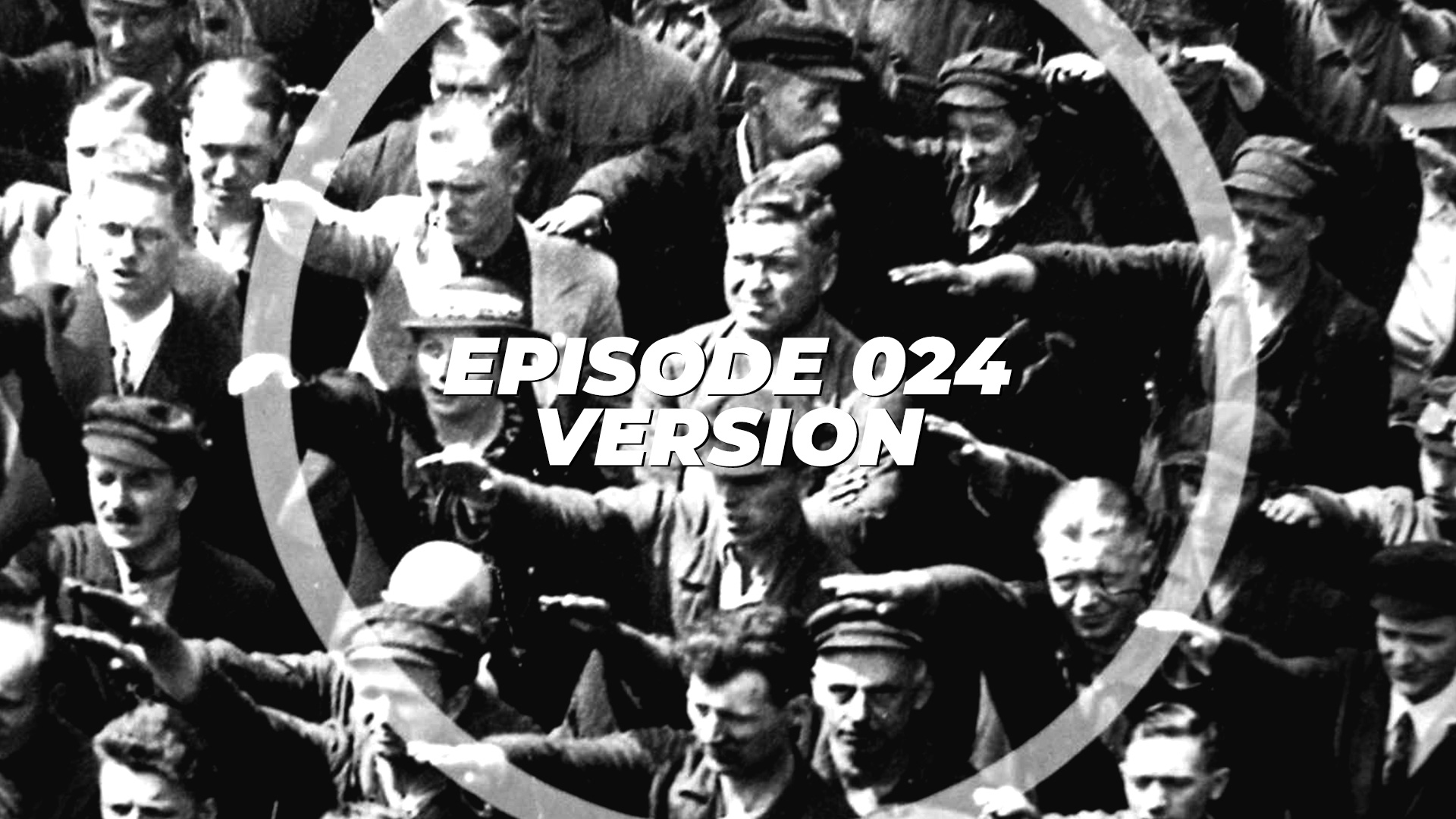 It’s easy to think that everyone in Nazi Germany was a monster because, well, it was Nazi Germany. This photo of a crowd of seemingly regular people performing the Nazi salute certainly doesn’t help fight that perception — the photo was taken at the launch of a German army vessel in 1936, during a ceremony that was attended by Adolf Hitler himself. As you can see, everyone in attendance is showing their undying support for Der Fuhrer by throwing out their very best Seig Heil. 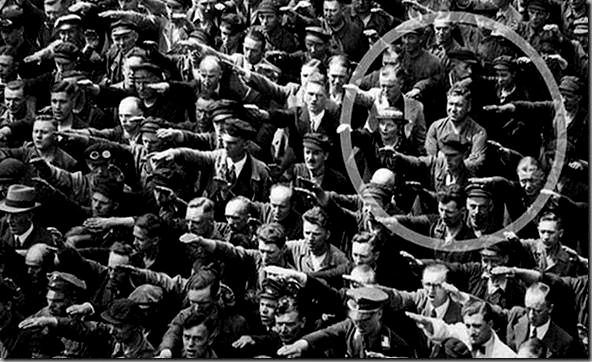 Look closer — not only is this guy not doing the salute at a time and a place where that could have easily gotten him killed, but he’s actually wearing his best “this is absolutely ridiculous” face.

Think about it: Even today, you can get beaten up for wearing the wrong jersey of the wrong team in front of people from a rival team. This guy was standing in the middle of a crowd of literal Nazis, and he still had the courage to not go along with them.

How do we know that he wasn’t just resting his arms or something, though? Because we actually know who he was: His name was August Landmesser, and not long after this picture was taken, he was arrested for trying to marry a part-Jewish woman, which was illegal in Nazi Germany. That’s right, this guy had “attempted marriage” in his criminal record. Neither Landmesser nor his would-be wife survived the war, but their two daughters did, and in 1991 one of them recognized her father in this picture and began sharing his example of courage with the world.

To choose to be responsible to what is true — to be yourself —  in a world that is constantly trying to change you will be your greatest accomplishment. And the pressure to conform is insane. Don’t believe me? Consider this…

Think back to a time when you were younger and someone asked you this question: “What do you want to be when you grow up?” and you had an answer. Not like, “I want to be an alligator. Teenage Mutant Ninja Turtle.” What did (or do) you want to be?

As you get older, everyone starts looking the same. Something about culture and life herds us down from this big sea of possibilities and skyscraper dreams and slowly we get funneled into the same direction. We all think we are unique and cool but we are not. There is someone in New York or Los Angeles that knows you so well that they create stores and make money off of you because they know you so well.

Life – culture – has a way of taking the edge off our dreams and vision for our life. Eventually, we all start moving in the same direction. No one dreams of living in a neighborhood where all the houses look the same…”I want to drive a white minivan”…but it is where we all seem to wind up.

Furthermore, we all seem to have the same sort of problems.

Here’s the point: As you look ahead from whatever stage of life you are in, there is one thing that looms large: It is predictable. There is a point where you will feel hemmed in. Life becomes too predictable. You won’t say this out loud, but you start to feel trapped. Because everywhere you look right now is…sameness.

There is something in you and me that think that the only way to breakaway from this normality is to run away from who I really am and what I am currently involved in. You’ll break a few hearts, rebel, lie, cheat, quit, start staying out later, hanging out with someone or a group of people that make you feel alive, get back with that boyfriend / girlfriend that made you feel all toasty inside…because the sameness is driving you nuts.

So here’s the point: Your fulfillment in life will not come from how well you explore your freedom and keep your options open just so that you can escape sameness. I would propose that your fulfillment in life will come by how well you end your freedom. I will take it a step further: It’s the things you chain yourself to that really set you free. Reality is that freedom to most teenagers is a desired destination but also a contradiction, especially as it relates to Jesus. The New Testament seemingly contradicts itself. Romans 6:18 is a great example:

”“You have been set free from sin and have become slaves to righteousness.”

You’ve exchanged one form of slavery (sin) for another form of slavery (righteousness). And us adults call that freedom? And expect you teenagers to just accept that? How does that make sense?

Perfectly. Because there is no such thing as ultimate freedom. You may want it, but it’s non-existent. Don’t believe me? Cool. Don’t die. That would be ultimate freedom, right? Freedom from your mortality is something everyone yearns for. So don’t die. Which is impossible. Because the overwhelming data shows that one out of every one persons die.

Ultimate, complete freedom doesn’t exist. There is such a thing, however, as maximum freedom. Freedom as intense as possible or permitted. And Jesus is the only One to offer that.

You see, there has never been a more opportune time for you to be influential in culture, now and in your respective future. Leadership is influence and Jesus is life. Everything and anything else is simply a cheap imitation counterfeit. Everything worth doing is worth doing boldly. Everything that matters requires courage. It is understandable to fear stepping into greatness because it is unknown and scary, but you should fear mediocrity ten billion times more because it is devastating. And too many students choose their path out of fear disguised as practicality.

To matter for what matters… to be responsible to what is true… to think of yourself less… to live from a relentless heart… to be brave enough to leverage your gifts… to choose Jesus in your culture will be to look a lot like a skeptical German at a Third Reich rally. You won’t be the same as others. Which is what you are really after in the first place, right?

You’ve been quiet for far too long… and your silence is deafening.

So shall we call you August…?

Let’s consider the picture at the beginning of Version 24 one more time.

As afore mentioned, the man in this picture is named August Landmesser, a worker at the Blohm + Voss shipyard in Hamburg. The photo shows Landmesser as the only person in a huge crowd not saluting at a Nazi rally. Landmesser joined the Nazi party in 1931 in hopes of finding work, but didn’t believe in their radical beliefs. In 1935, he was expelled from the party for marrying a Jewish woman, Irma Eckler.

After Landmesser fathered two daughters with Irma, he was arrested by the Gestapo and sent to jail for “dishonoring the race.” Marrying Irma was illegal in Nazi Germany. Irma is believed to have been detained by the Gestapo in a police prison in Hamburg. Their children were separated.

Landmesser was discharged from prison in 1941 but was soon drafted into a Penal Battalion. These battalion would be made up of extremely under-armed and under- trained civilians and criminals that are sent on very, very risky missions. It was essentially a way of killing people with a slight chance that they could help the war effort. Landmesser was later declared missing in action and believed dead.

All because of Landmesser’s actions in this picture.

Neither Landmesser nor his would-be wife survived the war, but their two daughters did, and in 1991 one of them recognized her father in this picture and began sharing his example of courage with the world.

INFLUNSR defines integrity as choosing to be responsible to what is true. Your fulfillment in life will not come from how well you explore your freedom and keep your options open just so that you can escape sameness. Your fulfillment in life will come by how well you end your freedom. It’s the things you chain yourself to that really set you free. So what have you chained yourself to? What is your August Landmesser — I am not moving from this — I will choose to be responsible to what is true — thing? Journal your thoughts. 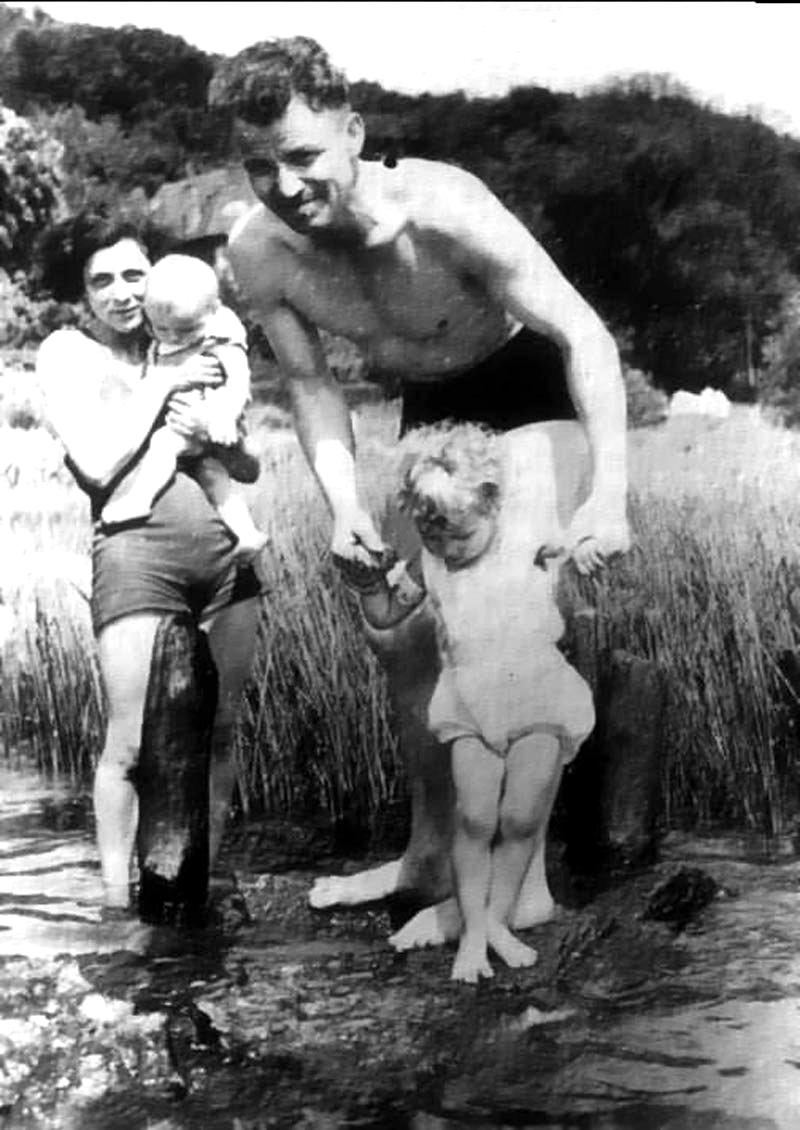