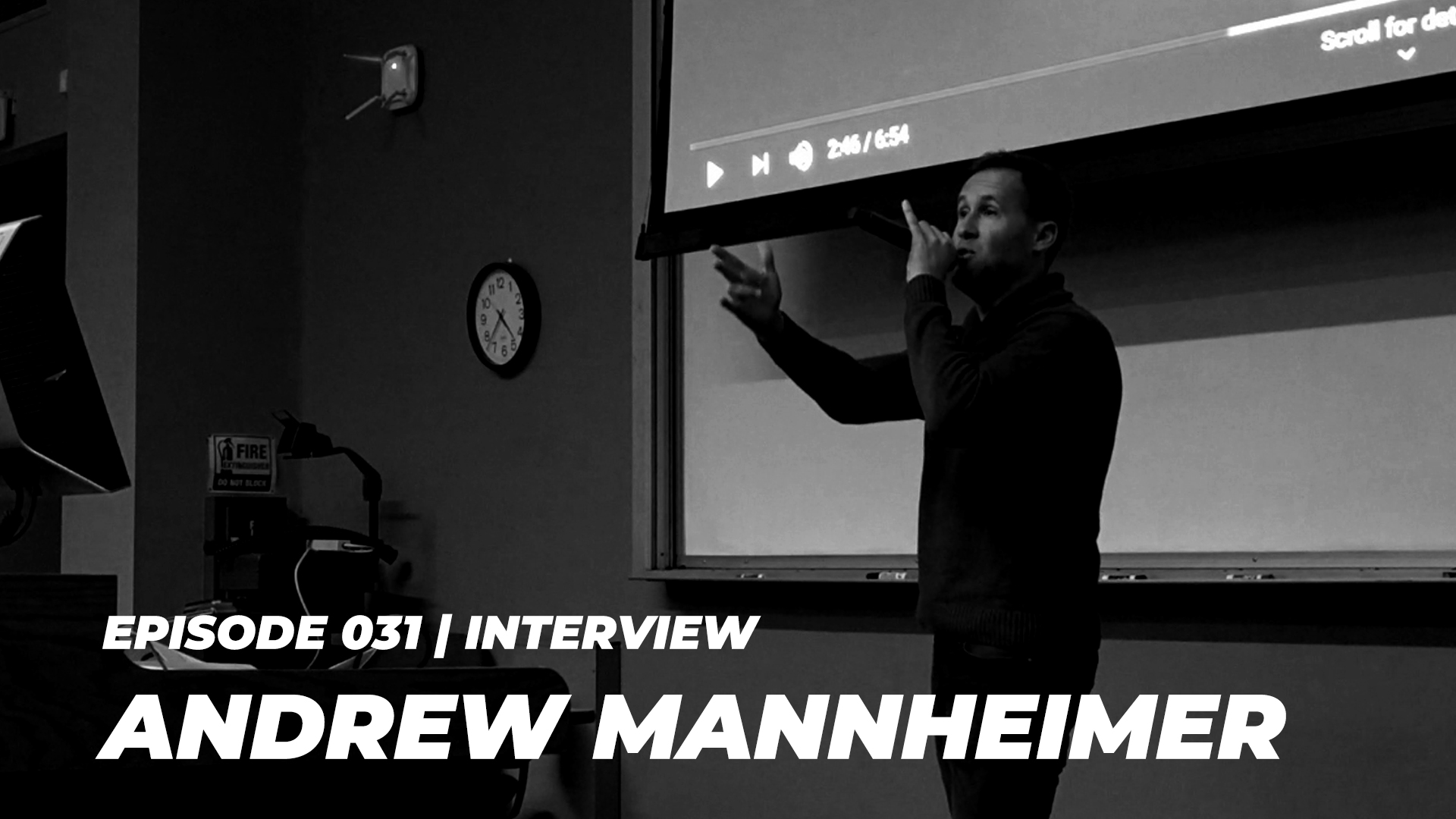 Andrew Mannheimer is a Lecturer in the Department of Sociology and Anthropology at Clemson University. Dr. Mannheimer received his Ph.D. from Florida State University in 2016. His research interests include education, race, ethnicity, and culture. His dissertation examined secondary teachers’ views and uses of Hip Hop culture. Dr. Mannheimer helped develop and teach a Sociology of Hip Hop Culture course which received positive media attention from USA Today in 2013 and uses hip hop to creatively communicate concepts in his classes.

Andrew and Stuart have an impassioned conversation about choosing to be responsible to what is true and what it means to be a next generation leader worth following.

(An excerpt from The Day the Revolution Began by NT Wright)

In 2000, the National Gallery in London put on a millennial exhibition entitled “Seeing Salvation.” That was a case in point—especially remembering that European countries tend to be far more “secularized” than the United States. It consisted mostly of artists’ depictions of Jesus’s crucifixion. Many critics sneered. All those old paintings about someone being tortured to death! Why did we need to look at rooms full of such stuff? Fortunately, the general public ignored the critics and turned up in droves to see works of art, which, like the crucifixion itself, seem to carry a power beyond theory and beyond suspicion.

The Gallery’s director, Neil McGregor, moved from that role to become director of the British Museum, a job he did with great distinction and effect for the next decade. The final piece he acquired in the latter capacity, before moving to a similar position in Berlin, was a simple but haunting cross made from fragments of a small boat. The boat, which been carrying refugees from Eritrea and Somalia, was wrecked off the coast of the Italian island of Lampedusa, south of Sicily, on October 3, 2013. Of the 500 people on board, 349 drowned. A local craftsman, Francesco Tuccio, was deeply distressed that nothing more could have been done to save people, and he made several crosses out of fragments of the wrecked vessel. One was carried by Pope Francis at the memorial service for the survivors. The British Museum contacted Mr. Tuccio, and he made a cross especially for the museum, thanking the authorities there for drawing attention to the suffering that this small wooden object would symbolize. Why the cross rather than anything else?

During the 2014 season of Promenade Concerts in the Albert Hall in London (the “Proms,” as they are known, make up a major annual festival, offering world-class music cheaply to a wide audience), on September 6, 2014, Sir Simon Rattle conducted an extraordinary performance of J. S. Bach’s St. Matthew Passion. Not only was the music wonderfully performed, the whole thing was acted out, choreographed by the American director Peter Sellars, a professor at University of California in Los Angeles, who is noted especially for his unique contemporary stagings of classical operas and plays. In a broadcast talk during the intermission, Sellars explained that this wasn’t theater; it was prayer. What he was doing, he said, related first to Bach’s musical portrayal of the story of Jesus’s death and then to our modern appropriation of both the story itself and Bach’s interpretation. At no point did Sellars make any specifically Christian confession of faith. But it was clear throughout that he saw the story of Jesus’s crucifixion as the story par excellence in which all human beings are confronted with the full darkness of human life and with the possibility, through inhabiting that story themselves, of finding a way through. Just as the world as a whole, whether Christian or not, dates itself by Jesus’s birth, so the reflective world, whether Christian or not, regularly finds that the story of his death, in art, music, or literature, provides a unique focal point for the dark dilemma of human existence and also a shining light to guide us through. 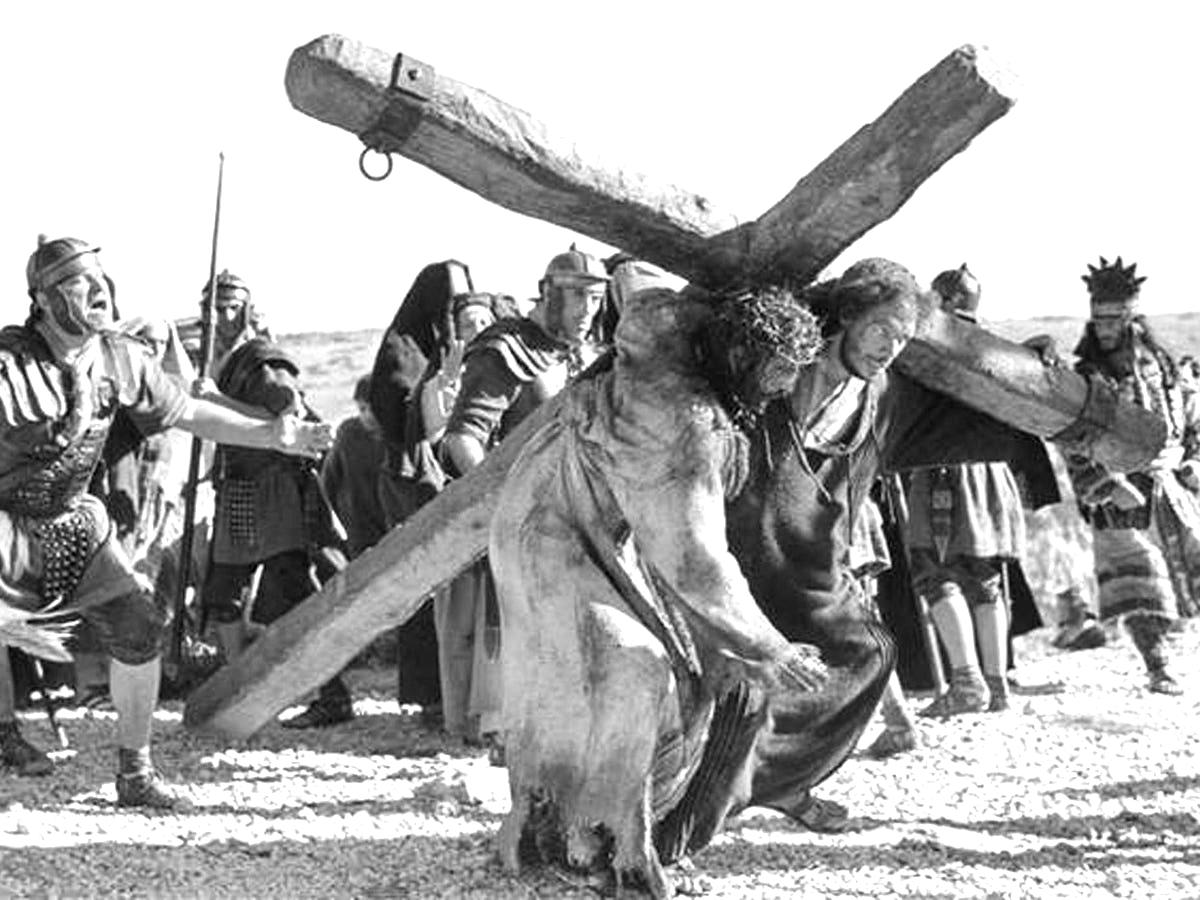 We could pile up plenty of other examples, each of which would increase the volume of the question: Why? Why does this death and the story in which we find it carry this power? It seems to go well beyond any one articulate explanation, and it certainly goes way beyond the boundaries of explicit Christian faith. I think of the Jewish novelist Chaim Potok, whose artistic hero Asher Lev searches for imagery to express the pain of modern Judaism. The only thing he can find that will do—to the predictable horror of his community—is the crucifixion scene, which he paints in fresh and shocking ways. I think of the way in which the first Harry Potter novel ends with the disclosure that Harry had been rescued, as a young child, by the loving self-sacrifice of his mother. We could go on.

Skeptics may well continue to see the execution of Jesus as just one among thousands of crucifixions carried out by the Romans in the Middle East. But for reasons that seem to go beyond mere cultural traditions, this particular death still carries enormous evocative power. And just as in the Middle Ages many found that they could relate to that story by meditating on the “instruments of the Passion” (the scourge, the crown of thorns, the nails, and so forth), so today various human elements of the story—the cockcrow as Peter is denying that he knows Jesus, the kiss by which Judas betrays his master—have become proverbial. They seem to sum up the way in which we humans get things horribly wrong, but at the same time they do so within a larger and more powerful context of meaning.

When we come to more explicitly Christian presentations, the same point emerges all the more powerfully, especially when we notice how the cross, even though it’s such a simple symbol, somehow resists being turned into a mere cliché. In Roland Joffé’s award-winning 1986 movie The Mission, the cross in various forms haunts the whole narrative. The story begins with the death of one of the early Jesuit missionaries to the remote South American tribe of the Guarani. The tribesmen tie him to a wooden cross and send him over the vast Iguazu Falls, providing the movie with its poster image. The story ends with the massacre of the unresisting leaders, carrying the symbols of the crucifixion in procession, as the Portuguese colonial forces, bent on enslaving the natives rather than evangelizing them, close in and open fire. The meaning of the cross — especially its stark opposition to the world’s ways of power — is allowed to hang like a great question mark over the entire narrative.

More explicit again are the many ways in which the cross has been described in the classics of Christian literature. In John Bunyan’s famous Pilgrim’s Progress (1678), the hero, Christian, is trudging along, weighed down with a huge burden. Eventually he comes to a place where, in Bunyan’s matchless description:

There stood a Cross, and a little below in the bottom, a sepulchre. So I saw in my Dream, that just as Christian came up with the Cross, his Burden loosed from off his shoulders, and fell from off his back, and began to tumble, and so continued to do, till it came to the mouth of the Sepulchre, where it fell in, and I saw it no more. . . .
Then was Christian glad and lightsome, and said with a merry heart, He hath given me rest by his sorrow, and life by his death. Then he stood still awhile to look and wonder; for it was very surprising to him, that the sight of the Cross should thus ease him of his Burden.

Allow one more example, out of thousands of possible ones, of the way in which the crucifixion of Jesus appears to carry a power that goes way beyond any attempt to rationalize it away. A Roman Catholic archbishop described how three mischievous young lads decided to play a trick on the priest who was hearing confessions in their local church. They took turns going into the confessional and “confessing” all sorts of terrible sins and crimes to see how the priest would react. Two of them then made off in a hurry; but the priest stopped the third one and, as though taking him seriously, announced that he was going to impose a penance on him. The lad was to walk up to the far end of the church, toward the figure of Jesus hanging on the cross. He was to look Jesus in the face and to say three times, “You did all that for me, and I don’t give that much“—snapping his fingers on the ”that.“ The young man did it once. He did it a second time. Then he found he couldn’t do it the third time, but instead dissolved into tears. He left the church a changed person.

””And the reason I know that story,“ concluded the archbishop, ”is that I was that young man.”

Why? Why is this story so powerful? What kind of sense does it make to suppose that the death of one man nearly two thousand years ago, in an obscure Roman province, could have that kind of power? What sort of revolution is it that was launched on that dark and horrible afternoon?

The question “Why?” is important. But we ask it because we observe the reality.

INFLUNSR. defines integrity as choosing to be responsible to what is true.

So in the interest of being responsible to what is true on Good Friday, let’s wrestle with a question that few high school students who are following Jesus ask…

Why did Jesus have to die?

Why couldn’t Jesus just forgive the people that offended him, stole his glory from him, sinned against him? We do that every day: we forgive people that have wronged us…but we don’t die for them.

This question is bothersome if you really wrestle with it. The Sunday school answer is that Jesus had to die to pay for our sins: When we sinned, we robbed God of His glory and somebody had to die for sin. But if you are going to be intellectually honest, you have to press further: What kind of God would come up with a system that required that of His Son? He is God…He can do whatever He wants. Thinking that way puts God in a box; it’s as if God were a victim of His own system.

Why can’t God change the rules? Have a big All Skate? If humanly someone can forgive that kind of sin, surely God can forgive us.

God presented Christ as a sacrifice of atonement, through the shedding of his blood—to be received by faith. He did this to demonstrate his righteousness, because in his forbearance he had left the sins committed beforehand unpunished— he did it to demonstrate his righteousness at the present time, so as to be just and the one who justifies those who have faith in Jesus.

What character traits does God show through these verses?