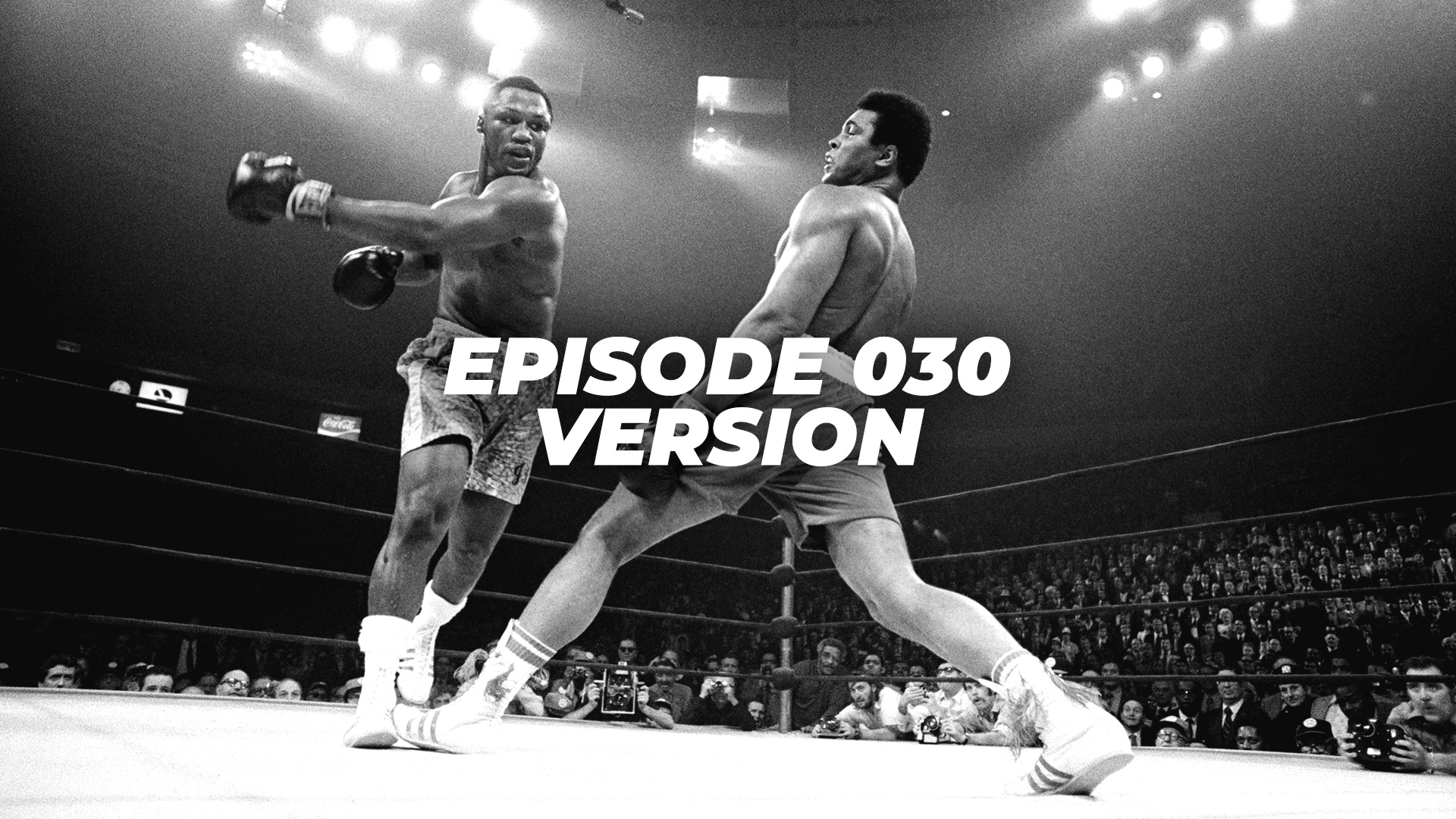 On a March morning, in a suite at the Essex House, half a century ago, Muhammad Ali’s longtime friend and adviser Gene Kilroy received a call from the late Budd Schulberg, a writer whose contribution to the American canon includes “The Harder They Fall,” “On the Waterfront” and a line most famously recited by Marlon Brando but seemingly uttered by just about every failed fighter before or since: “I coulda been a contender.”

Though Ali had just suffered his first loss, it was Joe Frazier who was in perilously bad shape at St. Luke’s hospital in Philadelphia. Packed in ice, his blood pressure racing, the undisputed heavyweight champion of the world was unable to stand or urinate, eat or drink. Schulberg heard a rumor that Frazier’s condition was fatal.

Ali heard Kilroy and Schulberg on the call. He didn’t need it explained. But even as Kilroy grimly repeated what the writer had heard, the most confident man on the planet began to crumble.

“He was scared to death,” Kilroy recalls. “Like his heart had stopped.”

Ali got on his knees, pressing his head to the floor. “Allahu Akbar …” God is great.

“If anything happens to Joe,” he said, “I’ll never fight again.” 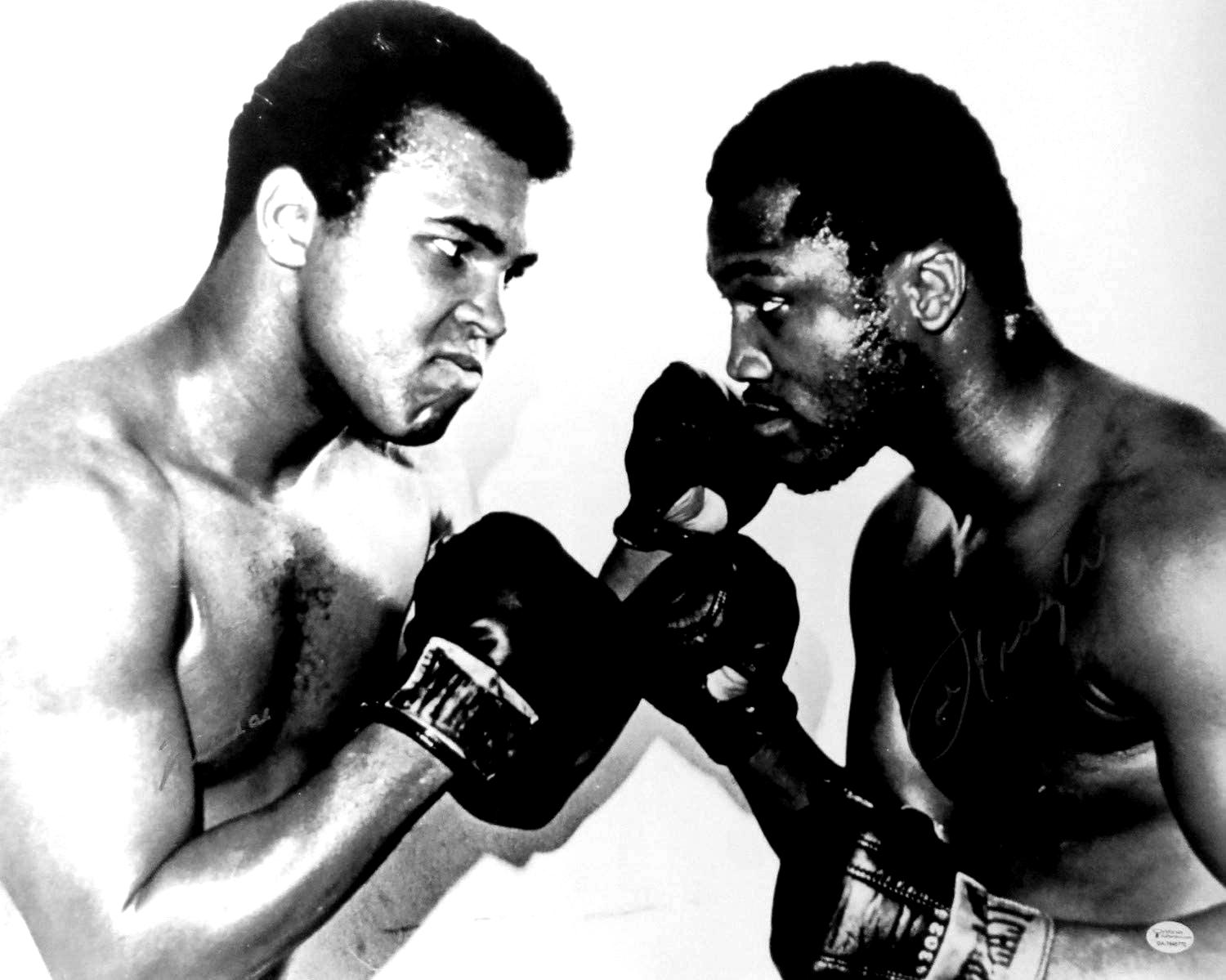 Five decades later, well into a new millennium, the “Fight of the Century,” as Ali-Frazier I was billed, remains the fight of any century. As other sports are metaphors for what boxing actually is — combat — other athletes inevitably compare themselves to fighters. But Ali and Frazier remain the fighters to whom fighters compare themselves.

They were more than epic antagonists. In a seething, divided country preoccupied with race, they were freighted with meaning, each made a proxy for something larger than himself.

Ali’s standing was earned the hard way, by refusing induction into the Army during the Vietnam War. The decision cost him his title and an almost four-year layoff from the sport. Meanwhile, the man who won the heavyweight championship in his absence — the 12th child born to Rubin and Dolly Frazier, sharecroppers from Laurel Bay, South Carolina — was unforgivably cast as the “white man’s champion.” But if you can strip away the sociology and the politics (perhaps an even more arduous task today than it was then), their virtue becomes ever more apparent.

Each man came wielding a legend in his left hand. For Ali, it was the jab; for Frazier, the hook. If they each recalled archetypes — the Stoic and the Fabulist — they were even greater together than by themselves. Together, they made an art of endurance.

Of course Ali fell to his knees.

And the way that they did — the qualities with which they fought, their abilities to withstand both cruelties and physical punishment — feels today as if those prayers were answered. 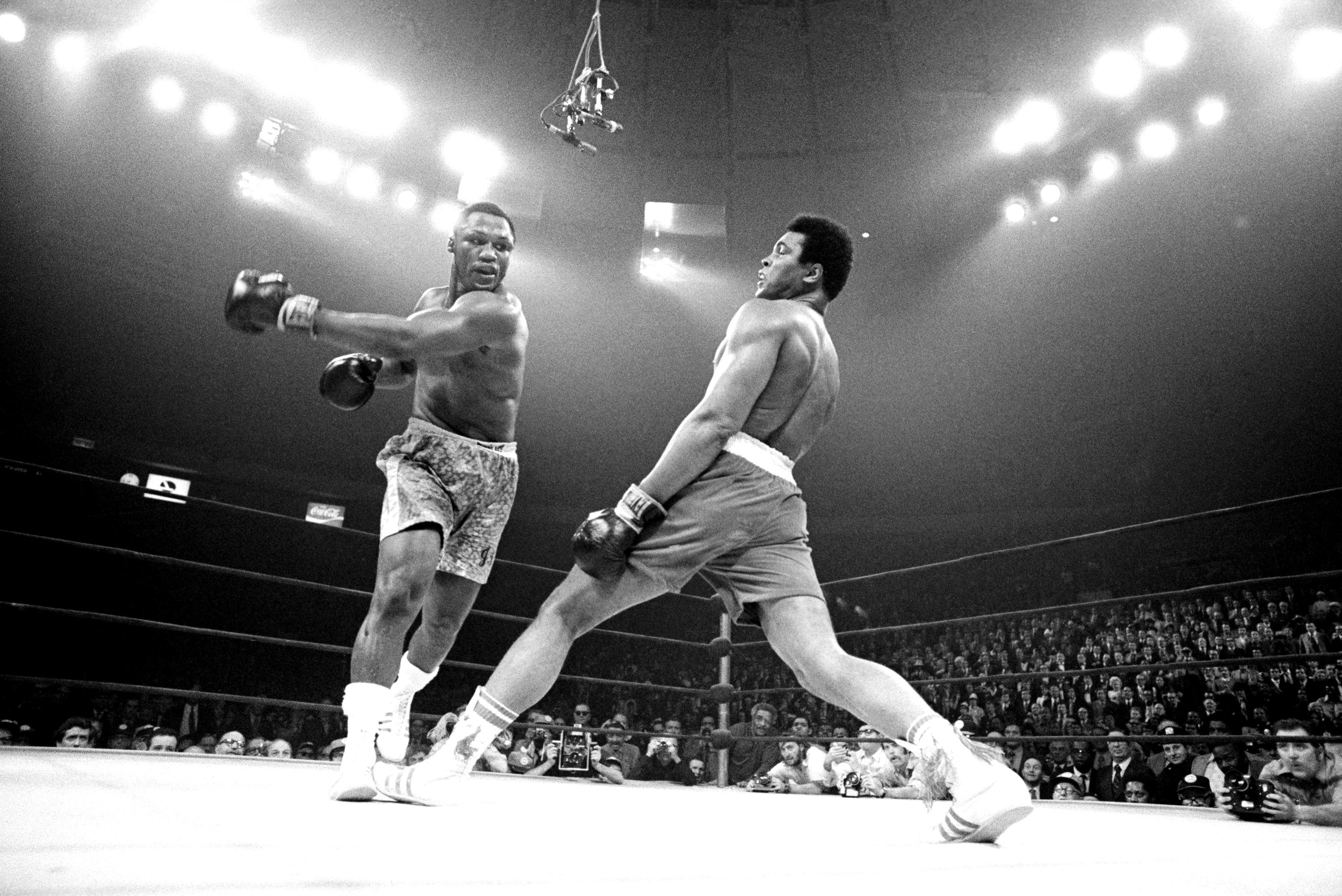 To look at the recently remastered tape from Madison Square Garden suggests a film, or maybe several by the late director Sidney Lumet, which is to say something very specific in both palate and mood, time and place. It was the early ’70s, and New York — for all its turmoil and incipient decrepitude — felt like the most potent city in the world.

It was the American capital of sports, television and intellectual life. On March 8, 1971, however, they would all converge. There were cops and mob guys and hustlers and Playmates and everywhere one looked an abundance of stars (including mere writers, who counted as stars in that long-ago, far-away town). It was a star, by the way, who pulled off the evening’s most unlikely coup: Frank Sinatra finagling an assignment as a ringside photographer for Life magazine.

Still, the most arresting description of the evening isn’t visual but auditory. “A visceral roar,” recalls Larry Merchant, then a columnist for the New York Post. “Madness in the sound machine.”

The intervening decades have done nothing to diminish the din. Merchant has heard it again since — in the 10th round of the first fight between Evander Holyfield and Riddick Bowe, and in select spots during the trilogy between Marco Antonio Barrera and Erik Morales. But again, only in moments. That night was different. There was a sound — a kind of buzz, really — that sustained itself throughout the 15-round contest.

There were 20,455 in attendance. “And everyone in that crowd thought he or she was on the right side of heaven,” recalls Merchant.

The judges’ scorecards — all for Frazier — merely tallied the winner of each round. Under today’s 10-point must scoring, Frazier would likely have won the 11th — in which the ropes seem to keep Ali upright — and the famous 15th — in which Ali was felled for the first time — by 10-8 margins. But the scores are mere arithmetic. None of them reflect the majesty of the evening.

“In the abstract math of boxing, it’s not always easy to tell who won the fight,” says Merchant. “I was one of the astigmatic dunces who scored the fight for Ali.”

As did Kilroy, whose sympathies were a matter of record. Still, neither man would argue with the result. 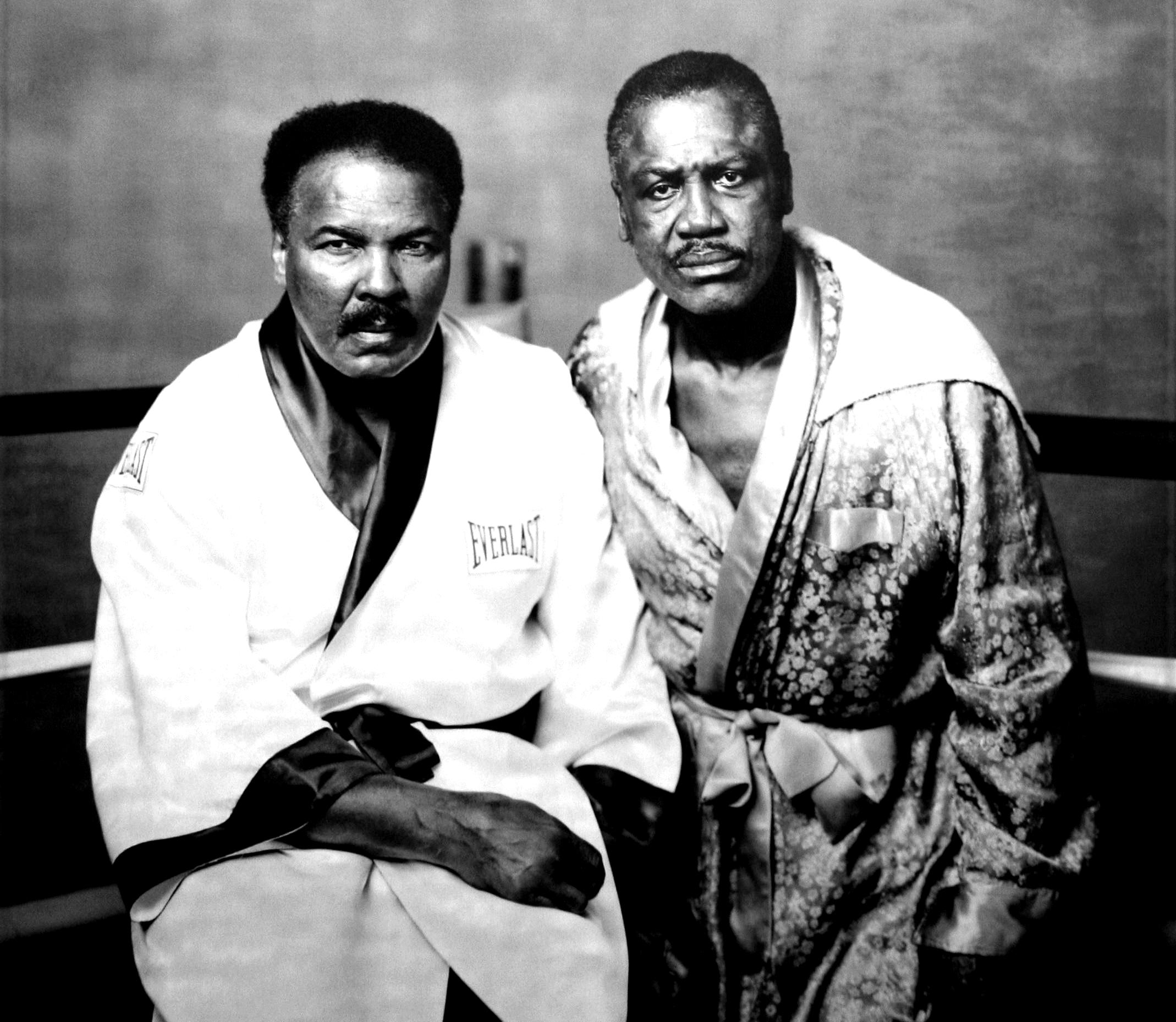 “Nobody would have beaten Frazier that night,” says Kilroy. “I mean nobody. Ever.”

Look at tapes of, say, the NFL or the NBA from 1971. You’ll see men who are smaller and slower than you might have remembered them as a kid. They couldn’t compete with today’s players. But that’s not the case here. Most heavyweights of today are bigger than Ali and way bigger than Frazier, who weighed 205 pounds the morning of the fight. But they’re not more skilled. They’re not better. And nobody, in tandem, was ever more courageous.

For Ali, it was a turning point. Wherever one stood on Vietnam or the draft, it was now impossible to deny his valor. If he began the night as the prettiest, he ended as the toughest.

Even with a grotesquely swollen jaw (to which Diana Ross herself would apply a bag of ice), his post-fight trip to the Flower First Avenue medical facility “lasted about 10 minutes,” Kilroy recalls. “Ali didn’t want anyone to say Joe put him in the hospital.”

But at what price? It was a turning point for Frazier too, the beginning of his physical decline. His hospital stay lasted several weeks.

The third fight, the last one, was in Manila. “It was like death,” Ali would recall. “Closest thing to dyin’ that I know of.”

Still, for all the talk of death — how close they came, and how willing they were — something about the two of them will last forever.

To many, this fight was about good vs. evil, right vs. wrong. For the two men in the ring, though, it was never about anything other than the will to win. Who had the will to continue when fatigue took over? Who had the heart, the desire to keep throwing punches when his arms felt like cinder blocks? Who had the toughness to take the punches when the pain became unbearable?

And most of all, who had the mental stamina to endure when his mind would ask his body, “Is this worth it?”

We might never reach the levels of discomfort in our lives that Ali and Frazier had that night in New York. However, we face many of their same fundamental questions each day: Is this worth it? Is what we sacrifice going to prove to be worthwhile? Can we keep going for the greater good? Can we continue to live through this COVID restrictive world?

Philippians 4:13 is an often quoted verse, but more times than not, misappropriated. People tend to use it as a monicker for supreme power. However, a close look at what Paul writes the Church in Philippi reveals something much more “… for I have learned how to be content with whatever I have. I know how to live on almost nothing or with everything. I have learned the secret of living in every situation, whether it is with a full stomach or empty, with plenty or little. For I can do everything through Christ, who gives me strength.” Philippians 4:13 is a grit verse. Choosing passion over distraction, with Jesus at the center.

Much like Ali and Frazier, no matter how tired or how much pain we feel, we must answer the bell. It would have been easy for either boxer to walk away that night — but the easy rarely gives us satisfaction. We are all not built to take that road, that path of least resistance. We know what we are doing will prove worthwhile, even though, at the moment, it doesn’t seem that way. We have to train our minds to block out the negative talk, to remove that doubt because we know we can answer the bell and come out fighting every round just like Ali and Frazier.

When we think of these men, let’s think of their will, their character and most of all their grit to answer that bell 15 times.

And then let’s answer the bell ourselves.